Yep, you read that right.  I have an arranged marriage by my Father.  Oh, and I live in America and I got married in 1998 when I was 28 years old.  It sounds absurd, doesn’t it?  Who in their right mind would allow their Father to pick their husband?  In a free country?  In the 21st century?

I did!  Feel free to call me an idiot or one who made a wise decision. (smile)

To my friend who is a wife:

This was a hard post for me to write because you are already married!  To some that are reading this, you may have a fabulous marriage and to others, that’s the furthest thing from the truth.  Now, I know how we women like to compare ourselves to one another, BUT I caution you NOT to do that!  Sister in Christ, don’t go there!  We shouldn’t be comparing or competing with one another ever, because all it does is bring hurt and disappointment.

Furthermore, the last thing I am here to do is plant seeds into your head telling you that you do not have a wonderful marriage if  the Lord did not arrange it.  You can still have a thriving marriage.  Remember, God has plans for you that are good, not evil.  Don’t be discouraged either if your spouse happens to be Mr. Wrong in your eyes.  God is in the business of transforming lives!  The journey might be difficult and hard as you overcome many obstacles, but in the end you can have a glorious marriage.

In the coming weeks I will be writing many posts on marriage, so stay tuned!  But in the meantime, I wanted to share with you my pre-courtship story.  It will give you a little more background on me and my marriage, which I think might be helpful to you when reading future posts on the subject of Wedded Bliss, (or the lack of).

Also, I STRONGLY encourage you to be an older woman to a younger one who is in need of Biblical direction regarding marriage.  Share with her my story AND your story.  Plus show her what to look for in her future husband.

How can a young woman without the proper Biblical upbringing know how to discern what to look for in a husband?  Those were my thoughts as I headed out on this journey.

For me, I felt with the right husband my life could be wonderful and with the wrong husband I could be living a life that was like a death sentence.  (No need to go there because I already made that choice!)  You can read a little more about that here and here.

I wanted my Father’s help; my Heavenly Father, that is.  Surrendering to the Lord and asking Him to intercede on my behalf, for Him to choose my husband just for me.  I can honestly tell you it was the second best decision I made, with following Christ as my number one.

Here’s where I was when this process began.

I came to Christ at age 26 with a desire to someday meet my Prince Charming and have the fairy tale wedding that all women dream of.  However, as I dug into the scriptures I soon learned that a God-fearing woman was to submit to her husband.  (I had to do what?)

Not wanting to do that anytime soon, nor wanting to settle for a man that was second-best, I soon became content in my singleness!  (Before Christ, I was the epitome of a contentious woman, with a capital ‘C’. There was much for me to learn before I was willing to hand my life over to some man that I had to follow.)

I read the Bible, referencing all the scriptures that talked about a woman or a wife because Godly wisdom is the BEST wisdom to have!  Along with that, I also read a short book called, Let Me Be a Woman, by Elisabeth Elliot which certainly made a profound impact on me.  (And no, I don’t receive compensation for saying that.)

I had a lot to learn about being a Godly woman.  I became asleep to my desires of being married, much like when God caused Adam to fall into a deep sleep so He could fashion Eve from him.

So, into a deep sleep Adam went while God was in the process of arranging the first marriage of mankind.

And the LORD God caused a deep sleep to fall on Adam, and he slept; and He took one of his ribs, and closed up the flesh in its place. Then the rib which the LORD God had taken from man He made into a woman, and He brought her to the man. Genesis 2:21,22

While being asleep to my desires, I started to grow in the things of the Lord.  Seeking the scriptures and trying to be obedient to what I was learning, even if it didn’t feel good!

Soon, I started to meet men (mostly from church because that was the only place I went to, outside of my job, or the all-female gym that I had attended).  Remember, I wasn’t seeking out the next hot guy that I could date for fun.  I was content seeking the Lord.   Learning.  Growing.  Serving Him.

“But the Helper, the Holy Spirit, whom the Father will send in My name, He will teach you all things, and bring to your remembrance all things that I said to you.”  John 14:26

Some rules that I had established in my mind, thanks to the Lord’s prompting:

I made the decision that men had to approach me because I was unwilling to approach them.  Not because I was playing any games with them but because I wanted to start off any future courtship with the man God chose for me with the right foundation.  In God’s word it says that a wife is to follow her husband.  So, I felt it was best to not play the game, Follow the Leader as me being the leader.  If the man was interested in me, then he needed to ask me out, not the other way around.

Also, I would examine their character more so than their outer appearance (even if they were easy on the eyes!)  I wanted to see if they would qualify to the standards held in the scriptures for a Godly man, after all my future husband would be leading me for the Rest. Of. My. Life. so I didn’t want to make that decision based on how I felt about him.  I asked the Lord to guard and protect my heart.  To not be deceived by my emotions.

During this time I made a list of character traits along with other things that I felt my future husband should have and then I daily, prayed over the list.

“And the LORD went before them by day in a pillar of cloud to lead the way, and by night in a pillar of fire to give them light, so as to go by day and night.”  Exodus 13:21

And the Lord went before me… 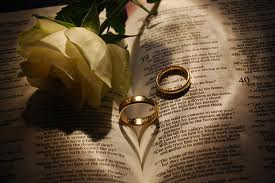 For the single woman
Here is a list of ways to discern if the man is spiritually mature enough or not to be your future husband.  (I am sure more could be added to this list.)
Watch for some of the ‘Red flags,’ that are listed below.  If he is not the man God has chosen for you, these will surface, either when you are just getting to know him or when the relationship is just beginning to develop.  Be alert and pray for discernment.  And if ANY of these come up, run away from him as fast as you can before your emotions get the better of you!
If there are any ‘Red Flags’ surfacing at the onset of your time with him, this is NOT God’s best for you!
Things I did so my Heavenly Father could arrange my marriage:
For Parents
You can take all of these thoughts and concepts and teach them to your daughters (and sons).  Since I only have sons, my husband and I teach many of these ideas and principles to our boys and they are only 10 and 12 years old!  (Obviously, for boys you will add to the list to teach them to lookout for the ‘immoral woman’ as well as other things.)
So, in closing, did my Father deliver when I surrendered my life to Him…in the choosing of my husband?  Did He give me a God-fearing husband?  One that matched the list?
You bet He did!  He blew me away with His choice, but funny thing about it was I was rather shocked and surprised by who He picked.

“Now to Him who is able to do exceedingly abundantly above all that we ask or think, according to the power that works in us, to Him be glory in the church by Christ Jesus to all generations, forever and ever. Amen.”  Ephesians 3:20,21

You can read about my courtship and engagement post called, This is Not Your Typical Love Story.
Live a poured out life for the Master,

I am linked up with: