Sometimes I just want to close my eyes and pretend I am not living this life because this is not what I had expected, yet, this is what I prayed for.

From being sick for so many years and now this?  The home being lost, again!

Why on earth would the Lord ask me to revisit my dreams, to live in my home once again only to have it taken away again?  My emotions fought with my spirit.  I didn’t want to question God because I KNOW He knows what is best for me.

Let me tell you a story about,  How to Lose Your Dream Home Not Just Once But Twice.  It’s a ridiculous story, but a true one nonetheless and I can’t wait to share it with you so you can find God in the midst of your own hardships (and sometimes absurdities) of your life.

It was March of 2010 when we received the first notice from the Bank that our home was going to be sold on the courthouse steps (foreclosed upon) on April 6th.  So we moved out and moved into a rental.  We were very blessed for our rental home, and we were content there.  We had no desire to move back to our dream home on Ashbury Lane (nor did we think it was ever a possibility), instead we looked ahead to our future with hope.  That chapter of our book was now closed, we thought.

April through August of 2010 we were able to pay our bills.  Praise the Lord!  For 5 months we were just getting by.  My health was improving, and I felt wonderful.  Perhaps there was a light at the end of the tunnel after all?

Until I turned the page of my book to September, where a visit to the Urgent Care cost us almost $400.00.  My boy sliced his finger, and he needed stitches.  Having no health insurance we relied on the Lord to provide, and of course, He did.  But would we have enough money to pay our rent, was the thought that ran through my mind?

I continued to read on until October came.  It was during that time that my beloved was rushed to Emergency.  An EKG was ordered because of a low heart rate and a Cat Scan later revealed a kidney stone.  Thousands of dollars are now owed to the hospital, yet thankful for a healthy husband.

I now become hesitant to turn the page to November.  What’s next?  Can we afford to pay rent?  The escrow my husband had been working on for months still had not closed, which meant he wouldn’t get paid.  We were told by the Lender that it would close before Thanksgiving.  Thanksgiving came and went but with no paycheck.  Our landlord was so gracious to us and told us to pay him when the escrow closed.  He also showed up with a small Christmas tree for our boys, in addition to gift cards for them to buy Christmas presents.  We were blown away by his generosity, empathy, and compassion.  In the meantime, the property on Ashbury Lane, (my dream home) still had not sold on the courthouse steps.  The Bank kept postponing the sale of our home, but we didn’t understand why.  In our minds, it didn’t really matter to us because it wasn’t like we were going to move back there. Or so we thought!

I started to think I was reading a book on horror when I came across the pages of December.  Week after week the escrow still had not closed.  In the meantime, my Beloved is doing everything he can to make money to feed us and to keep the utilities on, yet some were disconnected.  Plus, it’s been raining, and my boy has holes in the bottom of his shoes, and his socks are now getting wet.  We hardly have any money and what we do have is for food.

Jesus will provide, I tell my son.  We continue to pray for the Lord to meet our needs.

I hold him and tell him that the Lord has a plan in all of this.  “Don’t lose hope, I say.  God is moving and working on our behalf.”

I try to encourage and affirm who he is, “Regardless of your decisions and where ever they take us, do not doubt yourself because God has anointed you as the head of the household.  I will be by your side every step of the way.”

With tears in his eyes, he says to me, “I am like water to his thirsty soul,”

“It is not I that quenches your thirst, but the Lord, I remind him.”

Jesus replied, “If you only knew the gift God has for you and who you are speaking to, you would ask me, and I would give you living water.”  John 4:10

It broke my heart to see my Knight in Shining Armor so defeated in all of this.  I couldn’t fix his problem but what I could do was pray for him and our situation and try to have a good attitude as we endured this difficult time.

The sale of the Ashbury property has now been postponed yet another month.  We receive a certified letter from the Bank.  After a phone call is made to them, they inform us that we could qualify for a loan modification, but we had to be living in our property (seeing how the Bank had yet to foreclose upon our house back in April like they had told us, the home was still considered our property).  We had no desire to pack up all of our belongings and move back because we knew we would never qualify for the loan modification, plus the home could be foreclosed upon the next month!  We were hopeful that the Lord would provide for us financially so we could just stay in our rental.

Now things we owned were being sold on either Craigslist or Ebay so we would have money for food.

“God will provide all our needs,” was a constant reminder in our household.

Our boys were told not to expect any Christmas presents from us this year because we didn’t have any money for toys.  “I am sorry boys, but you won’t be getting any Legos this year,” I said.

It was a tough December for us.  At the beginning of the Christmas season, I wrote a short e-book called, How to Create a Christ-centered Christmas for Your Kids and I posted a link to it on Facebook.  Unfortunately, a family member of mine decided to smear my name on Facebook because of my Christian faith which he was (and still is) hostile towards.  I sobbed.  I was so tired of being persecuted by my family for my faith. “Blessed are those who are persecuted for righteousness’ sake, for theirs is the kingdom of heaven.”  Matthew 5:10

A few days later we hear from the neighbor kids that their parents don’t like me.  In fact, they tell our kids that their parents can’t stand us and we would probably sue them for all sorts of ridiculous reasons.  What!  That’s odd to hear, seeing how we hardly spoke to them! It still hurt my feelings.  “For we do not wrestle against flesh and blood, but against principalities, against powers, against the rulers of the darkness of this age, against spiritual hosts of wickedness in the heavenly places.”

Even though I knew what the Bible had to say and I knew we were under attack by the Enemy it was becoming more increasingly difficult to bear.  How much longer Lord?  When will the storms let up?

New Year’s Eve we decided to drive over to the Ashbury home to see the condition that it was in.  I remember that day well, and it is still painful to think about it.

As others were out celebrating and ringing in the New Year with hope, I couldn’t help but think we were probably moving back to the home and enduring another move filled with even more uncertainty.  Life did not look hopeful at this time, in fact, it looked downright depressing.

After a 10 month period, what we saw was a dismal sight:

We unlocked our front door and stepped into the dust-covered house.

I looked around to what was once filled with many memories… birthday parties, Christmas celebrations, friends, family, fellowship. I couldn’t help but question why the Lord would bring us back to this place?  Not only was the home a depressing sight, but we soon realized that our home had been broken into as the back doors were busted and left wide open and banging in the wind.

Dust covered everything.  There were minor vandalism and theft as well.  More sorrow and pain were added to my heart that day.  Along with more work because I had to clean the place!  Could the Lord really bring us back here, I thought? 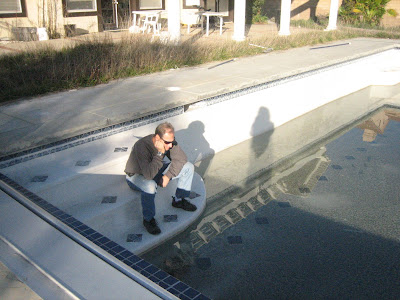 I wanted to stop reading this book, but I didn’t have a choice.

So I turned the page to January 2011, where I received more bad news.

One morning I discovered that there was something wrong with my car.  Later my Beloved takes a look at it and he said I would never believe what was wrong with it.  My response, “I would believe anything at this moment based on how our lives have been.”  He informed me that someone stole the catalytic converters off of the car.  I laughed (my other option was to cry).  That was clearly the enemy wanting to discourage us.

No weapon formed against you shall prosper, and every tongue which rises against you in judgment You shall condemn. This is the heritage of the servants of the LORD, and their righteousness is from Me,” says the LORD.  Isaiah 54:17

Seeing how we had little money and the escrow still had not closed, we felt we had no other choice but to make the move back to our home on Ashbury Lane.  It was a daunting and miserable time of a move, to say the least.

Although I wanted to curl up in the fetal position and just cry, it would serve me no good.  I had a home to pack, a family to care for, my health to manage, and a ministry to run.

We got all of our things into the home around January 23rd and the sale date of the property was scheduled for Feb. 9th.  Less than 3 weeks and we might have to move again.

Should I unpack our things? I thought.

The Lord made it clear,  “Take your boys to Me.  Show them that you trust Me.”  He said.

So I unpacked our home knowing full well that we may have needed to get out in less than 30 days.   Yet, it wasn’t until 7 months later that we moved.

So, we have now officially moved out of our dream house, not just once, but twice!

My desire and prayer over the years that I have walked with Christ is to be closer to Him, to know Him more and to filled with His glorious presence.

This is what I prayed for, and it hurts (my flesh), yet my spirit sings.

But the best part of the story is yet to come!  Join me soon for Part 2 where I will tell you of the many miracles that God did during that time on our behalf!

Plus, I will share with you what I learned about allowing God to be the main character of my story/my life, rather than me being the ‘leading lady.’