Skip to content
A few months ago, rather than having my eldest son attend his regular Sunday School class, he sat in the sanctuary with us to hear our pastor’s message.  We felt it was a good time to expose our son to the adult message to see if he had enough spiritual understanding for it.
The teaching that day was on the Beatitudes, more specifically the ‘peacemakers’.

“Blessed are the peacemakers, for they shall be called sons of God.”  Matthew 5:9

After the service, my husband asked our son if he understood the message and he said, “yes” and he also proceeded to tell us that he liked being in the sanctuary rather than his class.  Well , we will give that some thought.
Shortly after church, we headed to our car and as my two boys climbed in the backseat, my eldest (the one who just came out of the service where he heard about peacemakers, started to argue and fight with his younger brother!) my husband gently said to my boy, “Peacemaker”.

My boys’ growling response, “I don’t wanna be a peacemaker!” 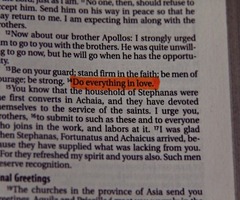 I could not help but laugh hysterically.

Here’s why: my son spoke his heart and he spoke it openly and unashamedly.  After I laughed at him I could see the look of conviction along with embarrassment on his face.  I realized in that moment that my actions could hinder him from wanting to share his heart with me again.  My laughter came across as if I were mocking him, but in reality, I WAS COMPLETELY IDENTIFYING WITH HIM.
“I do not want to be a peacemaker either”, I said to him.  I told him that it is hard for me to be a peacemaker but it is pleasing to Jesus if I do.  I continued to tell him that he just openly said how many adults feel, but they do not express it to others.  I thanked him for sharing his heart and told him there was nothing wrong with the way he felt.
“Living the ‘Narrow Path’ is hard to do”, I said.

Just like the impetuous Peter, who cut off the servants ear, we can relate to Peter’s personality.

“Then Simon Peter, having a sword, drew it and struck the high priest’s servant, and cut off his right ear.” John 18:10

I would imagine Peter had to learn to be a ‘peacemaker’ and  it was not natural for him either, however, I am sure he did the best he could to please the Lord to live peacefully with all men.
I told my son that a warrior for the Lord is also a ‘peacemaker’ because we are showing love to others.  As soldiers in the Lord’s army we can help build the Kingdom of God if we exercise restraint and self-control and extend graciousness, mercy, and love to others.  Yes, it is hard to do because we are denying our flesh.

“I say then: Walk in the Spirit, and you shall not fulfill the lust of the flesh. ” Galatians 5:16

Perhaps my boy is not quite ready for such a hard lesson and he is still better off to be ministered at his level!  I know the message is hard for me as well.  Lord, help me to walk in the Spirit so I do not satisfy my flesh.
Being a peacemaker is hard, but it is pleasing to the Lord.
Pin
Share
Tweet
0 Shares