Skip to content
The other day I wrestled with God from morning til night.  I was hearing His voice loud and clear but my flesh and insecurities were speaking louder still.  I guess I was hoping that what I was feeling would change His mind about what He was asking me to do!
It didn’t work.  His mind didn’t change.
So I battled with Him.  Sometimes reasoning with Him, sometimes pleading with Him and at other times I asked Him if He could give me a different message to deliver to the saints.

Source: Pinterest
One minute, I was like Jacob who wrestled with God and the next minute I was like Jonah who ran in the complete opposite direction of where God called him.  Yet, my heart was to be like Isaiah who said with a willing and open heart, “Here I am Lord, send me.”
Thoughts and questions swirled through my mind:
“How do I reconcile a bold voice that is paired with a sensitive, fragile, and sometimes, insecure heart?”
“How can I diminish the one and strengthen the other?”  “Is that possible?”  “Or is one of the spirit and the other of the flesh?”
“How do I not say what I am compelled to say?”  “Can I just stick my fingers in my ear and pretend I can’t hear the voice of the Lord?”
“Perhaps I can just lead a nice, quiet and non-confrontational life?”
“Can you give me a different ministry, Lord, maybe one that won’t hurt so much?”
How about the worship ministry?  Everyone loves to sing praise and worship songs.  Can that be my ministry, and by the way, can you teach me to sing?
His response, “That is not where I called you, Daughter. I gave you your personality, your giftings, your afflictions and convictions, all of which are to be used for Me, to please Me.”
It was no coincidence that day that I happened to hear Pastor James MacDonald talk about his own experience as God called him to do something difficult; to confront and rebuke another believer.
James told the story of how he didn’t want to and how he hoped the whole situation would just go away.  But God being God, kept prompting His son to rebuke a man he hardly knew.  What’s so interesting about this story was that God made it so clear to James as to what to say, and the words were not nice, but rather offensive!
The Lord told him, “tell this man he is a shameless, self-promoter.”
“Lord, can you go over that again, because I don’t want to tell him,” James replied.
This is what I love about the story (and what the Lord taught me).
James asked the man what it meant to speak the truth in love, (the man used to be a pastor but left the pulpit to publish his books and thus, promoted himself as a result), seeing how he was a former pastor, he was familiar with the verse.

“Love means to put your needs above mine,”  James said.

James went on to tell the man his needs,  “I need you to like me, to respect me and to respect my ministry.”

When I heard those words it was like the Lord put a blanket over my wrestling soul knowing that I needed to be comforted, knowing that I needed to be wrapped up in His words, knowing that I needed His love and stamp of approval to go where He was sending me.Now based on what I just listened to, one would’ve thought that I easily submitted to what God was calling me to do.  Ya, well, I’m not a quick learner because I still wrestled with Him!
In my mind I felt that it was appropriate for a pastor to confront and rebuke, but not so much for a woman, namely, me.
If I wasn’t convicted enough based on what I just heard, my day was going to get worse because I was  headed out the door for a field trip to the Open Doors, which served persecuted Christians worldwide.
Great men and women of faith laid their lives on the line for Christ in order to preach the Gospel and distribute bibles. Some were martyred for their faith and others were beaten and thrown in prisons.
One man, named Brother Mac was thrown in prison for 30 years because of just that.  At the end of his life he said,
“If I was given a second chance to repeat my decision to follow Christ, even knowing 30 years of prison lay ahead of me, I would make the same decision for Christ as I did before.” 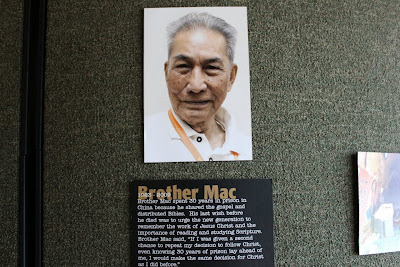 I was totally convicted!  What God was calling me to do was nothing compared to what He prompted in the hearts of these believers.
He was asking me to speak the truth in love; to lay down my life and take the time to pour into others knowing full well that they may not receive the message.  This would result in me being rejected.
Can I have a selfless concern for others?  Or am I too self-centered?  Too insecure?  Too worried about what others would say or think about me?  Would the sting of rejection and persecution cause me to not obey the voice of the Lord?
For many years I prayed for healing upon my sick body so I could be used by the Lord and during those years I prayed for the Lord to increase my borders in ministry.   Today, He is doing just that.  I have seen His hand time and time again in my life.  But here I am wrestling with Him and fretting about where He is sending me.
Will I respond like Caleb and Joshua when they spied out the land of Canaan or will I respond like the other 10 spies?

We entered the land you sent us to explore, and it is indeed a bountiful country—a land flowing with milk and honey.  Numbers 13:27  But the people living there are powerful, and their towns are large and fortified. We even saw giants there.  Numbers 13:28
“Let’s go at once to take the land,” he said. “We can certainly conquer it!”   Numbers 13:30
Do not rebel against the LORD, and don’t be afraid of the people of the land. They are only helpless prey to us! They have no protection, but the LORD is with us! Don’t be afraid of them!”   Numbers 14:9

The message that God has given me is not a popular one and at times, it is an offensive one.

To whom can I speak and give warning? Who will listen to me? Their ears are closed so they cannot hear. The word of the LORD is offensive to them; they find no pleasure in it.  Jeremiah 6:10

I won’t be received by all and many will criticize me for saying it.  What they don’t realize is that I am speaking the truth in love as I willingly lay aside my needs to be accepted and loved by others.  It’s certainly not a ministry that many would sign up for that’s for sure!  But my life is not my own, it was bought at a price and I want to pour it out for Christ and I want to obey Him.  When my life is over and I am standing face to face with my Creator, I can only hope to hear,

Perhaps God has placed in your heart a message that is hard to deliver or a ministry that He wants you involved in, and you too are wrestling with the Lord.  Do you see giants in the land as well?  Or do you see a land flowing with milk and honey?
It may be hard to enter into the land, but you have the protection of the Lord.

Live a poured out life for the Master,