Skip to content
The tandem bike.
That’s what my man and I received from a friend.

The bike was left to her by someone else and it was practically brand new.  And we received it as a gift; for free.  I was surprised the original owners just gave it away.

My Beloved and I couldn’t wait to take it out for a ride.
Since both my man and I already knew how to ride a bike we figured riding a tandem one would be A. Piece. of. Cake!
This is when we learned that riding a tandem bike is much like living an intentional, Biblical marriage…. 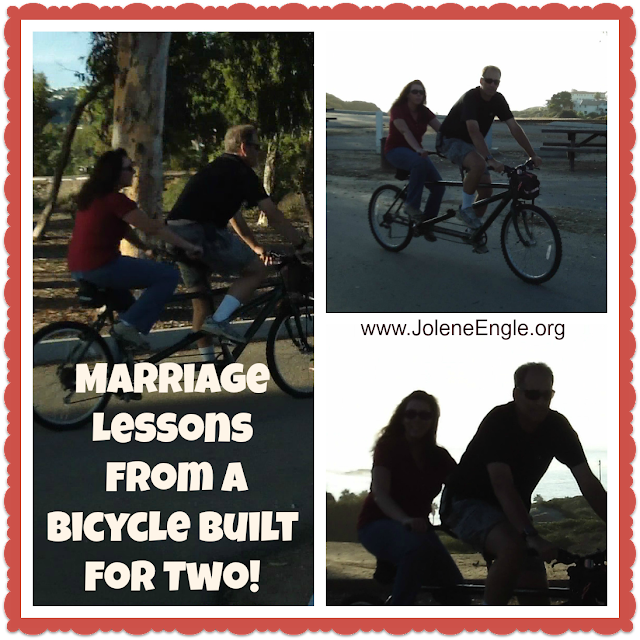 After my first ride around town with my Beloved on this new baby, I quickly figured out why the bike was given away.  Actually, I’m quite surprised the thing wasn’t thrown in a dumpster!

I’m convinced it was the wife who wanted to get rid of this thing because if she’s sitting in the back then she has absolutely no control in her journey. Not only do you have no control, but you can’t see what’s up ahead, either.

The picture you see above is just me and my husband simply strolling around the campground when we went beach camping.

There were no hills for us to climb.
No sharp turns to navigate.
No street traffic.
No signal lights or stop signs.
No big bumps in the road.
And no on-going starts and stops.
Riding without any of these things was simple and pleasant.
But if you get out in the real world (the road) you’ll encounter all of the above which makes for riding a tandem bike very difficult.
One thing I didn’t realize when I first rode this bike is that you and your husband have to pedal together.  The front pedals and back pedals move in unison.  If your man pushes the pedal, your pedal moves, whether your leg is in the way or not!
I couldn’t believe how much my Beloved and I were in constant communication as we rode this bike, even down to the smallest details as to what foot we used to pedal with.

My Beloved’s right foot is his dominate foot so that’s the foot his starts to pedal with.  But when I ride a bike I use my left foot to push off with because I have a bad right knee, it’s too weak to take the lead.

So as we were riding and then stopping and starting, I had to tell him I couldn’t start pedaling with my right foot.  Now, mind you, I’ve had a bad knee for over 10 yrs. and my husband knows I have a bad knee.  I don’t even ride my single bike anymore because of this.  But while riding tandem, my husband is leading us and making sure we don’t get into an accident and he’s not thinking he can’t begin pedaling with his right foot.

Since I lovingly communicated with him he became empathetic towards me.  Because of my weakness, he became a left-footed bicyclist.  Our marital oneness was strengthened as a result of this.

One time when we took this bike out we had our children join us with their bikes.  Since my boys are old enough to ride on their own they followed close by.  Sometimes they’d get behind us and then I’d just glance over my shoulder to see if they were doing okay.   When I did that the first time my husband asked me what was it that I just did because the entire bike just swayed.

He didn’t know I looked behind me, but he could feel the effects of what I was doing.  So each time I did this I had to tell him in advance so he could overcompensate making sure the bike wouldn’t swerve out of control.  I was helping him in his role to lead us.

Now if you’re a soon to be bride- I highly recommend some pre-marital counseling by riding a tandem bike every weekend until you say “I do”, or you change your mind and say, “I don’t!”  And by the way, I’m not kidding on this one!
For the newlyweds-  Grab a tandem bike and build your relationship through this exercise.  It’ll help you throughout the rest of your marriage.  I guarantee it!  And here’s why:  because you won’t have time to argue and stew over your situation!
For those that have been married for years-  This fun little exercise will break down some walls in your marriage, but only if you allow it!  Otherwise, you might just want to give the bike away like the previous owners did!

5 Marriage Lessons from a Bicycle Built for Two

My husband and I wouldn’t have been able to get to our destination if we didn’t work together.  We had to lay down our pride and be considerate to each other and respect each other’s role in this journey.  When those things took place within our marriage as we were riding the bike, our marriage grew stronger and our tandem biking riding skills grew as well!

Now let me take you back 14 years to when our marriage just began…..

On our honeymoon we rented a two-man, ocean kayak.  We were going to spend the day kayaking in the waters of Maui.  Sounds blissful doesn’t it?  Let me remove that thought from your head right now, because it wasn’t blissful at all.  It was more like torture and humiliation all wrapped up in one.  And I was a new bride!

The two-man kayak is very much like a tandem bike.  They both have the same premise; two people working together at the same goal.   But our kayak experience was a COMPLETE DISASTER!  We spun in circles and couldn’t even get back to shore, not to mention the fact that we tipped the thing over several times.  I’m sure I peed in my bathing suit because I was laughing so hard, oh wait, I hadn’t had babies yet!  The whole ordeal was hilarious and infuriating at the same time!  Although I don’t think my man was laughing, now that I think about it.

We’ve come a long way growing in our marital oneness.  We’ve grown so far that we’re keeping the bike. (smile)

And let us consider one another in order to stir up love and good works.  Hebrews 10:24

Now how about you?  Have you ever been on a tandem bike with your husband?  If not, are you willing to try it?  Or are you afraid to let him lead you?  Anyone been on a kayak?  What was your experience like?  Newly married?  Long-timers?  Can you see how these experiences are similar to a biblical marriage, you following his lead and communicating with him?